From Wikipedia History of Communication


The history of communication dates back to the earliest signs of life. Communication can range from very subtle processes of exchange, to full conversations and mass communication. Human communication was revolutionized with speech about 200,000 years ago. Symbols were developed about 30,000 years ago, and writing about 7,000. On a much shorter scale, there have been major developments in the field of telecommunication in the past few centuries.

Synchronous communications has more limitations - distance (how far can you yell) and memory (how long can you remember what was said or what to say).
Asynchronous generally means that it had to be recorded in some way to be transmitted

History begins with writing, the tools to record signal a point at which technology begins to overtake evolution? Also the point at which our communication can be asynchronous.
Pre-History is the period of time before writing, before knowledge could be passed without human memory.

Transmission of signals over a distance for purposes of communication. (Revitalization of synchronous?)

Telephone - Bell - 1870's - Voice Communication
Tele = Far (Greek)
Phone = Voice (Greek)
Telephone
Something like 6 billion in use.. Ultimate Live/Synchronous technology - a technology that enables a primary means of communication to work over distance.

Broadcasting: one to many, rise of mass media

the medium dictates the form - size of audience (scale) - amount of feedback and ...

A medium? Which medium?

"the content of a medium is always another medium" - McLuhan, Understanding Media

The internet as a medium has subsumed or seems to be subsuming all previous media (changing the medium as well).

Looking at the history of the internet and the web we see it starting out with asynchronous transmission of text, images, sound and video through email, chat and the like.

In the 20th century, radio and television became very well defined mediums. We instantly know what is radio, what is TV and so forth. On the internet, those mediums are being redefined, as all mediums are when a techinical transition occurs. This redefinition, of all live/synchronous media and the creation of new synchronous media is happening now (and that's what this course is all about).

What are the new forms?

Internet taking over television in time spent...
If you have an Internet connection, chances are you are spending much more time surfing the Web than watching TV. A new IDC study of consumer online behavior found that the Internet is the medium on which online users spend the most time (32.7 hours/week). This is equivalent to almost half of the total time spent each week using all media (70.6 hours), almost twice as much time as spent watching television (16.4 hours), and more than eight times as much time as spent reading newspapers and magazines (3.9 hours). "The time spent using the Internet will continue to increase at the expense of television and, to a lesser extent, print media," said Karsten Weide, program director, Digital Media and Entertainment at IDC. "This suggests that advertising budgets will continue to be shifted out of television, newspapers, and magazines into Internet advertising." The data also show that consumers tend to use the media they grew up with. The older the respondents, the more they consume TV, newspapers, and magazines; the younger they are, the more the Internet displaces usage of traditional media. Using search engines (84% of respondents), mapping and navigation services (83%), personal research (77%), and using email (76%) are the most frequent online activities. From: IDC study, U.S. Consumer Online Behavior Survey Results 2007: Part One: Wireline Usage (Doc #210097)

EFnet what exists from the original service (1988)

From: Internet as a dramatic medium

Taking it into theatre, using a chat-room-like technology (and IRC), Stuart Harris created an experimental theatre troupe: the Hamnet Players. After more than a year of preparation and experimentation, in December 1993, an international cast led by Harris performed an IRC adaptation of Shakespeare's Hamlet. The production appeared on computer screens around the world through an IRC channel coordinated from San Diego, California, and was repeated in February with Ian Taylor of the Royal Shakespeare Company in the title role. The second performance was enlivened by a bot, an automated program written to behave like a real user, which accidentally killed Hamlet halfway through the production. The inherent script-like quality of IRC and the use of direct speech as the main mode of communication are features which enhance the dramatic potential of text-based online communication. IRC shares the first of these features with MUDs and MOOs.

IRC, MUDs and MOOs are perfect for performers and audiences to mingle; the creation of the environment is a co-production between all who come to participate. The possibility to create text-based sets and objects that remain on the server for later use is what made MUDs and MOOs even more interesting than IRC as a venue for organized online performance.

CU-SeeMe was one of the earliest forms of two way audio/video conferencing on the internet. It was developed at Cornell University around the same time as web browsers came into existence (1991/2). 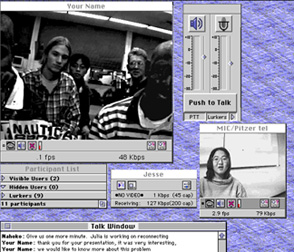 The limiting factors were the bandwidth and computer power of the people connecting as well as how many people could connect to a single server. The lower the individual's bandwidth, the higher the latency from when they did or said something to the time someone else saw or heard it. Having a "latency" of more than a minute was not uncommon.

This is a fascinating page that describes CU-SeeMe through various events that occurred between 1992 and 1995, culminating with Earth Watch 95 which was an event in 1995 where cameras from all over the world were connected and streamed through CU-SeeMe for anyone to view.